Crowdfunding - the latest word in publishing 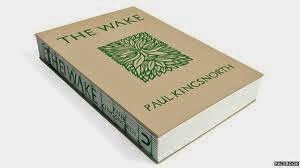 Last week there occurred a momentous event of groundbreaking proportions. And I'm not referring to the ghastly goings on in Gaza or the shooting down of a civilian aircraft over Ukraine. No, instead I refer to a story that has received scant attention in our newspapers. Indeed, the vast majority of the news reading public will not even be aware of it. I refer, of course, to the fact that it was announced last week that a debut novel that had been crowdfunded by members of the public, had made it onto the prestigious longlist for the Man Booker Prize. The book entitled The Wake is a historical novel set in 1066 by Paul Kingsnorth who turned to crowdfunding because he knew instinctively that no publisher was going to take any interest in his manuscript, which is written in what he terms "shadow tongue" - a hybrid of modern and Old English. Now, when you take into account the fact that for the first time in its history the Man Booker Prize has opened its doors to the US and non-Commonwealth countries, and that such class-acts as Ian McEwan and Donna Tartt have both been squeezed out of this year's contest due to the quality of the entrants, one really has to take one's cap off to Mr Kingsnorth. But more significantly, the publishing industry has now to sit up and take note of this extraordinary achievement by an entirely new publishing model. Unbound, the crowdfunding publisher behind The Wake has only been in business for three years but in this time has already successfully crowdfunded 65 books from the UK, US, Australia and Ireland.

For those unfamiliar with the concept of crowdfunding, this is basically how it works. A crowdfunding publisher will look over a manuscript or synopsis of a manuscript and decide whether it has  merit and is worthy of publishing. If they believe it is, the author will be invited to draft a proposal to potential readers to invest in the project, and the proposal will be designed as a webpage. This done,it will then be down to the author to send out the link via email and social media to raise donations from the public who like the sound of the project. And depending on the level of their contribution, donors will receive anything from copies of the book and acknowledgement of their contribution on the acknowledgements page, to access to the author's notes and a chance to actually contribute ideas to the narrative. In the world of computer games, crowdfunding has become a primary source for funding.

The implications for traditional publishing are potentially huge. "The traditional model is not working for a lot of authors," says John Mitchinson, Unbound's founder. "Publishing has become a hit factory with publishing houses only publishing a handful of books."

From my own limited experience, and that of  friends with writing aspirations, these words of Mitchinson's really do ring true. And anyone who has attempted to publish anything through conventional channels will know precisely what I mean (J K Rowling included). The fact of the matter is that it's nigh impossible to be accepted these days by a literary agent if you're an unknown writer. And if you do approach an agent, you'll need to write the kind of stuff they are already familiar and comfortable with; material they feel confident with when pitching to publishing houses. So you will invariably be likened to another successful author and pigeonholed as say, the next E L James (heaven forbid).

In 2009 I had the germ of an idea for a story that I thought I'd pen in the first instance for my kids. And then, like all enthusiastic would-be storytellers, went and purchased a copy of the Writer's and Artist's Year Book - the Bible for the writing fraternity. This compact tome tells you everything you need to know, including details for publishers, literary agents, wholesalers, e-publishers, self-publishers and so on. Armed with this volume, I went about drawing up a list of literary agents specializing in teen fiction and photocopying my first few chapters, which all agents will require along with a concise synopsis. And like all other enthusiastic novices, dropped off a large pile of large brown envelopes at the post office - only to have to wait for weeks and weeks, and in some cases months and months before receiving a reply from the agent. When your reply does finally materialise it will almost certainly read something like this:

Dear Mr Smithers,
Thank you very much for considering Bloggins and Partners to represent your novel, but due to this agency's very demanding work load, we are only able to consider a tiny fraction of the unsolicited manuscripts that come our way; and having read your synopsis we feel that your manuscript is not one that is suited to this particular agency.
We wish you the very best of luck in the future.
Yours faithfully,
Mr J Bloggins

After the 15th such letter (along with the returned chapters) had landed on my doorstep with that familiar 'thwack', I felt it time to move on. Some weeks later, however, I ran into an old advertising colleague, Hugh Salmon. Unbeknown to me, Hugh had moved into the world of publishing and had co-founded lovereading.co.uk - the online book site that was getting rave reviews from the national press. It was he who suggested I self-publish through either Matador or Penpress. I took his advice and plumped for Penpress because they promised to re-print copies at no extra cost in the event of demand. Penpress offered to edit, produce and market the book for the cost of around £1,600.

Was their service any good? Well, yes and no. Having had the cover professionally photographed and designed independently, Penpress oversaw the production - and in fairness they produced a very nice looking book. The typesetting was fine and the cover well reproduced. This said, their editing was patchy, their marketing non-existent and their press release poorly designed and peppered with spelling errors. Because I wanted my royalty paid to Centrepoint, I had to employ lawyers to draft a commercial participation agreement to be signed by both the charity and the publisher. The reason one has to do this is chiefly for tax reasons. In the UK if you want to give your royalty to charity, that royalty has to be paid directly by the publisher to the beneficiary, otherwise the author becomes liable for tax - despite the fact that he's giving it away. It's crazy, but that's how the UK tax system works.  Once all this had been agreed, Penpress arranged a book signing at Waterstones where I managed to sell 24 copies. I've since discovered that arranging book signings at bookshops is terribly easy: you just pick up the phone. Despite the legal agreement stipulating that Penpress would pay Centrepoint on a yearly basis, it took the publisher two years to pay the first royalty cheque - a measly £200 or thereabouts for the 200 copies sold. So much for the validity of commercial participation agreements.

Amazon has since launched CreateSpace, which allows you to download your manuscript, design your cover, price the book, get an ISBN number, write the sales blurb and then release your masterpiece as a book and an e-book onto Amazon's website - all for free. Needless to say, CreateSpace takes the lion's share of the royalty to make the whole exercise worth their investment. And of course, they won't publish anything. Drivel perhaps but nothing pornographic or politically dubious.

Now, of course, there are the new breed of crowdfunding publishers on the scene who are making waves primarily in America. One by the name of Inkshares recently followed me on Twitter, so I ran my book past them. Several weeks later I received an email back from its co-founder, Larry Levitsky who expressed an interest in adding the book to its growing platform and exposing it to the American market. So I agreed to write a proposal page on the condition that Inkshares agreed to pay 100% of my royalties to Cancer Research UK; a request they were happy to accommodate.

I've no idea if the project will achieve its target of $4,210, but if it were to, Cancer Research UK could stand to gain a tidy sum since my royalty on any future sales is a whopping 70%, and Inkshares claims to have an established distribution network in the US. If you'd like to learn more and possibly even go as far as backing the project, you can view my proposal here.

There will, of course, be a lot of eager eyes watching the progress of Mr Kingsnorth's book. Were it to do the impossible and pull off the top prize, the repercussions for publishing would be fascinating.

Whatever the outcome, the emergence of crowdfunding may well have knocked yet one more nail into the conventional publishing coffin, and looks set to open the floodgates to a sizeable untapped pool of writing talent.