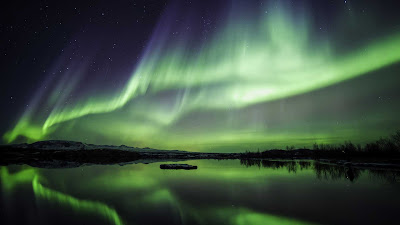 The last time I attempted to have a close encounter with the Northern Lights was back in 1990 when my brother and I decided to take a holiday together aboard a Norwegian cargo boat (the cargo being several tons of sardines). Setting sail from Bergen in our thermal underwear (it was March and pretty cold, after all), we were looking forward to the distinct possibility of viewing the Aurora from the ship's deck. What we hadn't quite realised was the fact that majestic fjords are not necessarily plain sailing - particularly at this time of year. This became patently clear on our first day at lunch when on taking our seats in the dining room, we couldn't help noticing that the tables and chairs had been ominously chained to the floor. The rubber place mats on which cutlery and glasses seemed to stick rigidly, were another pretty obvious clue. As our trip along the Norwegian coastline progressed, the motion of the boat slowly but surely began to imitate that of another vessel I had once boarded: the Pirate Ship at Alton Towers. One could just about handle the up and down motion, but once the side to side motion kicked in at the same time, I'm afraid most passengers headed swiftly (or at least as swiftly as one can go with all that movement going on) to the bathrooms located appropriately enough in the bowels of the ship. So when inevitably, the Northern Lights finally appeared to dance frenetically across the night sky, my brother and I had other more pressing engagements to attend to below deck.

It took another 30 years before I'd attempt to catch this elusive natural phenomenon for a second time. And on this occasion it was my wife who had noticed the ad for a trip aboard an Airbus to view the Aurora in the company of none other than Tim Peake, Pete Lawrence The Sky At Night presenter and Jon Culshaw the impressionist and keen astronomer. This special event was being organised as a fundraiser by Aerobility, a charity dedicated to giving those with terminal illnesses and disabilities of any kind, the opportunity to experience the liberating and exhilarating feeling of flying for themselves. It's a charity we know all too well, as Jennifer my wife is a wheelchair user and has taken to the skies several times with Aerobility. We applied there and then for seats for ourselves and our son. (Our daughter would have joined us but was flying to India that same day.) And within days our places had been confirmed, and the trip sold out. We were lucky.

On the day, we set off from home in NW London and arrived at Gatwick's plush Sofitel Hotel in time for a coffee and tea reception followed by introductions in the dining room. Mike Miller-Smith the CEO of Aerobility who is himself a wheelchair user, gave an emotional address about Aerobility's incredible work and played us a short film. We were then treated to a full explanation of the science behind the Aurora by Pete Lawrence, one of the TV presenters associated with The Sky at Night. Lawrence is not only a brilliantly informative speaker, but also witty. Getting your audience to laugh as well as learn is a gift; one Mr Lawrence possesses in spades. Having thoroughly whetted our appetite for this natural spectacle, we were then treated to another visual feast of impressive proportions: lunch. First course was a stunning representation of our solar system laid out in the form of miniature cheeses, an egg yolk and a selection of miniature pickled vegetables. I'm afraid to say I polished off the entire solar system with relish. It was quite delicious; as was the main course: roast beef and Yorkshire pudding alongside an assortment of artistically arranged vegetables. Following petit fours, we were given a swift telescope demonstration and camera workshop by Neil Parker, the former Deputy Director of the Royal Greenwich Observatory. Having digested these useful tips, the main treat of the day was served up with aplomb by Squadron Leader Mike Ling. Being a Red Arrow squadron leader, Ling explained, was something most people found pretty awe-inspiring. But on this occaion he was about to be trumped big time by this afternoon's very special guest. Mr Tim Peake took to the podium like a duck to water. He is a natural speaker and his enthusiasm for his subject is pretty contagious. The atmosphere in that room for the next hour was virtually palpable. His account of his six months on the International Space Station was insightful and totally absorbing. He explained that what little spare time he had to himself, he spent taking photographs of earth from a viewing platform that constantly faced towards our planet. And then he proceeded to show us these remarkable high definition images, which were breathtakingly beautiful. The following 20 minutes was opened up to the floor as Mr Jon Culshaw took a microphone around the room and introduced questions from the floor in the voice of David Dimbleby. Everyone seemed to have questions, but thankfully the children were given priority. One child asked what the food was like on the ISS. Another asked him how he overcame his fears. And another wanted to know what scared him the most. To all these questions, Peake gave thoughtful and detailed answers. The food was rehydratable and could be heated up. And no, it wasn't particularly brilliant. But you just had to get used to it. As for his fears, he acknowledged that this was a very good question. His way of coping with his, was to focus wholeheartedly on his training. It was the only way he could really overcome them. His most scary experience was without any doubt his space walk outside the space station when no more than a single cable separated him from the security of the station and the all-embracing black infinity of outer space. Someone else beat me to a question I was itching to to ask; how long it would take in his view for a manned mission to Mars. He was fairly convinced that such a trip would realistically take place by 2030, but then added that it was also very feasible that the momentum now being created by Elon Musk and Spacex would bring that launch date forward. 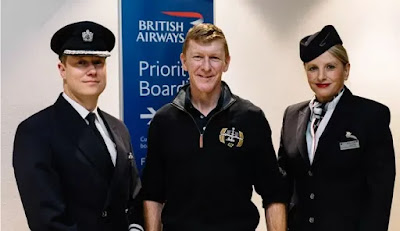 The questions could have easily carried on for the entire afternoon, but we were under a tight schedule and it was now time to grab our boarding passes and passports and take the monorail to the exit gate for departure. I can honestly say that this is the first time I have ever heard the following announcement while boarding a plane: "Ladies and gentlemen, welcome to your British Airways flight to nowhere."

There were 140 passengers in total - around 20 or so of whom were wheelchair users and needed to be transferred onto a special narrow wheelchair to wheel down the aisle of the Airbus to then be carefully lifted and seated in their seat. This tricky operation was carried out with military precision and grace, and before we knew it, all 140 passengers were comfortably seated and being plied with refreshments. The cabin crew, by the way, were all volunteering their services free to the charity.

Once we were in the air, all the cabin lights were turned off and all the illuminated seat belt signs were blacked out with black tape. It took around 15 minutes for your eyes to acclimatise to the dark. But of course, by doing so, you could enjoy a remarkable view of the stars. The only light was being given out by the moon, which was apparently particularly bright that night. And as we cruised at 30,000 feet above the clouds, we were treated to a commentary by Pete Lawrence who pointed out the stars and their constellations on both sides of the aircraft.

As we approached the coast of the Shetland Isles, the mysterious and very clear Aurora suddenly appeared above the horizon line as a very distinct band of light. According to Pete Lawrence who has wintnessed the phenomenon no fewer than 240 times, this wasn't a spectacular display, but it was certainly very visible. The chance of seeing the Northern Lights from an aircraft are 50:50, so we certainly felt very priviledged to have done so.

So what exactly are the northern lights or aurora? The scientific definition is fairly technical and complex, so without wanting to speak another language, we can define these dancing and swirling lights as countless collisions of electrically charged particles spewed out by the sun into the earth's atmosphere. The lights can be best viewed above the magnetic poles of the northern and southern hemispheres. They are known as the Aurora borealis in the north and Aurora australis in the south.

As the aircraft turned for home, we were served our second meal of the day, courtesy of British Airways. This was followed by after dinner speeches by Mr Donald Trump, Professor Brian Cox, Carl Sagan and Patrick Moore - in the form of the exceptionally talented Mr Jon Culshaw whose extraordinary ability to replicate the precise tone and inflexion of his subjects is breathtaking. It was, I have to say, the perfect ending to a long but very memorable day.

Our thanks go to Aerobility and British Airways for making such a remarkable trip possible, and, of course the fabulous cabin crew and our wonderful speakers. Finally our special thanks must go to Mr Tim Peake whose contribution and presence made this particular trip so very special for everyone.