'First Man'​ - one man's journey into his own personal space 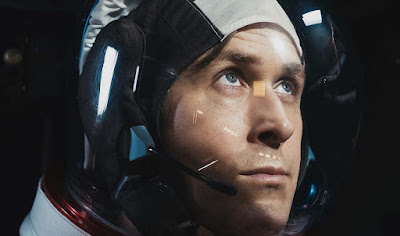 I went to our wonderful local fleapit The Phoenix at the weekend with the scientist in the family, our son, to view 'First Man' directed by Damien Chazelle who gave us 'Whiplash' and 'La La land.'

This is a far more ambitious movie in that it attempts to recreate the late 1960s - a challenging period of American history in which the US struggled with its foreign policy over Vietnam while also desperately trying to win the war with Russia over conquering space.

Against this backdrop, which Chazelle portrays with much authenticity, this film focuses not on the extraordinary human achievement and the triumph of a nation, so much as the rather solitary and moving journey of the narrative's chief achitect, Neil Armstrong.

Armstrong, by all accounts, was a fairly solitary and modest figure who, following his colossal achievement, shrugged off all publicity for a quiet life of academia. His own family described him as 'a reluctant hero.' And it's this side of the moon landing story that Chazelle chooses to show us. Unlike the brazen Buzz Aldrin (how could you not be brazen with a name like that?), Armstrong was a quiet, contemplative man who found it difficult to share his emotions - particularly following the tragic death of his young daughter from a brain tumour. He was the quiet kind of hero that we all like to gun for. But for him, going to the moon wasn't just a way for mankind to gain knowledge, it was a deeply personal and profound journey he felt compelled to make in order to make sense of his life.

Ryan Gosling plays a very credible and restrained Neil Armstrong while Claire Foy produces a very good performance as his wife who is desperately trying to hold the family together and smiling for the cameras, while her husband risks life and limb in the name of science.

This is an intelligent, well crafted film that attempts to throw light on America's 'reluctant hero.' And to a large degree, it succeeds in pulling it off.