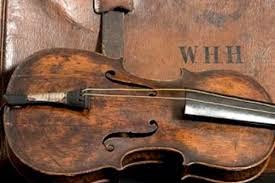 Why is it that artifacts of enormous historic significance and great works of art that were once thought lost to the nation, always show up in suburban attics?
This was the case when a rather sad piece of history was auctioned last week for the grand sum of £1.1 million (once the buyer's premium had been added). The item in question being a very tatty looking violin that had certainly seen better days, and was almost certainly unplayable.
Its poor owner, one Wallace Hartley had unfortunately been employed by the British shipping company, White Star Line  to play aboard the maiden voyage of its spanking new passenger liner from Southampton to New York. The year was 1912 and the boat was, of course, the ill-fated Titanic.
The story of Wallace Hartley's band playing the hymn 'Nearer, My God, To Thee' while the great ship went down has passed into Great British folklore and has come to represent that Great British, unflappable spirit in the face of adversity.
Poor Wallace and the other brave members of his ensemble all drowned along with 1,500 other crew members and passengers.
Quite how the violin survived is something of a mystery. It was believed to have been strapped to his chest in a leather bag, but was not officially accounted for in the inventory of items later recovered. It is more than possible that it was initially stolen or went missing and came to light later that year when Wallace Hartley's fiance, a Miss Maria Robinson sent the following telegram to the Provincial Secretary of Nova Scotia: "I would be most grateful if you could convey my heartfelt thanks to all who have made possible the return of my late fiance's violin."

Touchingly, the violin had in fact been bought by Miss Robinson for her fiance to mark their engagement, and she had gone to the trouble of having it engraved to this effect. What makes this story all the more poignant is the fact that Miss Robinson never did marry, and kept her late fiance's violin in its case until she died in 1939. 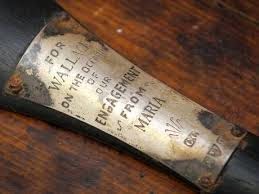 It then passed to her sister, Margaret who passed it on to Major Renwick of the Bridlington Salvation Army. Renwick who was fully aware of the instrument's provenance, gave it to one of his members, a violin teacher.
The instrument remained in the Bridlington area until it was finally discovered in the suburban attic seven years ago. A letter with the instrument states: "Major Renwick thought I would be best placed to make use of the violin but I found it virtually unplayable, doubtless due to its eventful life."
It was taken to the government's Forensic Science Service in Chepstow which considered the corrosion deposits "compatible with immersion in sea water." And for the past seven years historians, scientists, forensic experts and Hartley's biographer have all examined it and come to the conclusion that the instrument is authentic "beyond any reasonable doubt."
The violin was brought to Wallace Hartley's home town of Dewsbury, Yorkshire and auctioned by Andrew Aldridge. Bidding which started at just £50.00 soon became heated and frenetic, and it wasn't long before the price of £350,000 was reached. Thereafter, one could hear a pin drop as the price continued to soar. At £750,000, the battle was between two telephone bidders; the eventual winner being a British collector of Titanic memorabilia.
While it isn't the most expensive violin to be sold at auction (a Stradivarius fetched £8.9 million in 2011), it is undoubtedly the most expensive unplayable violin ever sold, and has set a record price for Titanic memorabilia - the previous record being £220,000 for a 32-foot plan of the Titanic.
Alex Pearl is author of Sleeping with the Blackbirds
Posted by Anonymous at 12:33