Chicago is my kind of town 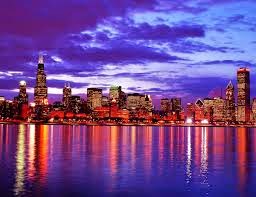 Advertising is a funny old business. I should know, I've been employed as a copywriter for more years than I'd care to remember. But one of the perks, if you happen to work for a large international agency, is the opportunity to occasionally work abroad.

Not so long ago I took a business trip at the last minute to Chicago.Our Creative Director's PA who was frighteningly efficient managed to arrange a flight for my working partner and myself to fly American Airlines the next morning, first thing. Better still, when the following morning dawned and my colleague and I shuffled, bleary-eyed, to the check-in desk at Heathrow, we were, for some unfathomable reason, upgraded from Business to First Class. So the pair of us in our tee shirts and jeans traipsed over to the First Class Departure Lounge to take our place among the dapper suited businessmen.

It was a good start to what turned out to be a thoroughly enjoyable business trip. This was largely down to the fact that we hadn't been asked to the Chicago office to produce any creative work. Instead we had been invited to take part in an advertising awards scheme. Let me explain: advertising agencies are obsessed with winning industry awards to demonstrate to potential clients and the world at large how brilliantly clever they are at selling stuff in a creative and intelligent way.

Now, as it happens, this rather large global agency for whom I worked (and I won't name names) didn't have a terribly good track record in this department, so not to be outdone, some bright spark in the New York office had suggested the idea of creating an awards scheme just for the agency's own offices around the globe. This way the agency could award itself the awards it so desperately craved. Brilliant.

So there we were, locked in a room with representatives of the creative departments from New York, Paris, Milan, Barcelona and Helsinki, deliberating over a bunch of ads and direct mail pieces which had been submitted by all the offices in the network in the hope of winning one of these fabulous awards. I might add here that the awards themselves had been created at great expense and did look rather splendid.

The very good news, however, was that judging would only take place in the morning, and following lunch, we'd be free to explore the Windy City before flying back home.

As a result, we wasted little time in setting off for the Willis Tower (formerly known as the Sears Tower). From its 103rd floor you can walk around its Skydeck, 1,353 feet up, and take in the most spectacular views of this majestic city of handsome skyscrapers set against the backdrop of the vast Lake Michigan, and the surrounding areas of Illinois, Indiana and Michigan.

Back at street level we headed for the famous Marshall Fields department store (now Macy's). I'm not a keen shopper but this building is well worth a visit. The store can trace its heritage back to 1880 and this lovely building was completed in 1906. On the top floor there is an impressive and rather touching plaque proudly displaying the names of all employees who had completed 50 years of loyal service. The list is remarkably long.

As for those advertising awards, I remember very little indeed.

Alex Pearl is author of Sleeping with the Blackbirds
Posted by Anonymous at 10:47