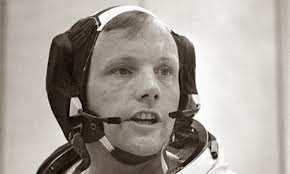 I knew back then that it was a momentous occasion. I was ten years of age and this was the first time
my parents had actually allowed me to stay up late in pyjamas and dressing gown to join them and my elder brother around the rented black and white television set. Annoyingly, this wasn't to watch 'The Avengers' or the outrageous 'Till Death Us Do Part', but something far more surreal: a fuzzy art-house type film of a cratered landscape badly choreographed to electronic bleeps and unintelligible American voices.

The moon landing of 1969 was watched on television by a staggering 500 million people worldwide. The immortal words uttered by Neil Armstrong as his boot touched the lunar landscape were his own, and have now become iconic. Though the clunky technology of 1969 was unable to transmit the phrase perfectly. The word 'a' before 'man' was lost in the ether, so 500 million heard the less than perfect: "That's a small step for... man. One giant leap for mankind." Armstrong was sure that he'd said the line in full and computer technology some years later was to prove him right.

More impressively though, Neil Armstrong managed to avert disaster moments before the lunar module touched down. Believing that the craft was heading directly for what looked like an unsafe landing area, he took over the manual controls and landed it safely further afield with no more than 45 seconds of fuel to spare.

Armstrong was originally chosen by NASA management as the commander of the mission on account of his lack of ego, and it's remarkable looking back on his extraordinary achievment that this modest and private man should have so consciously shunned the limelight for so many years following the historic touch-down. And let us not forget the incredible bravery of this three-man crew including Buz Aldrin and Michael Collins. For the risks these three faced were immense, and the chances of never returning to Earth very real.

Yesterday it was announced that Neil Armstrong, the first man to step on the moon, died at the age of 82 due to complications following heart surgery. President Obama paid tribute to his achievement by describing him as "one of the greatest American heroes of all time." It's an epithet that may have made Neil Armstrong shudder. And I suspect that it is this aversion to celebrity that will cement his place in the history books, because if history teaches us anything it's that the world's most reluctant heroes receive the biggest standing ovations, the biggest send-offs, the biggest obituaries; and in Neil Armstrong's case, deservedly so.