The ad man who's been airbrushed out of the picture

The year is 1995 and in the leafy and affluent village of Fleet in Hampshire, the police have been called out by a particularly distressed individual to a deeply bizarre and grizzly scene that wouldn't be out of place in a macabre episode of 'Silent Witness'. Only this isn't fiction.

On their arrival at a beautifully converted barn, the police are lead across a well manicured garden and then down a manhole into the bowels of an eerie underground tank. And here in this dank and poorly lit underground hide-away their eyes are greeted by the corpse of a middle-aged man. Unlike most they come across, this one is virtually naked, stripped down to his boxer shorts and is hanging upside-down from the ankles with his wrists tied behind his back. His head is immersed in a pool of stagnant water no more than six inches deep. The man who discovered the body is apparently the brother of the victim and is clearly in a state of distress.

In most cases the discovery wouldn't have received much in the way of column inches in the local papers, let alone the national press. But this case is different, because the corpse in question is that of Christopher Martin, one of advertising's most distinguished copywriters and one of the founders of Saatchi and Saatchi.

Within days the news hits the headlines and is on the airwaves. The advertising industry is shocked by the news and one of Mr Martin's former colleagues, Sir John Hegarty when interviewed by The Independent newspaper, makes it clear that he firmly believes his old working partner was murdered.

Some weeks later the second bombshell hits the advertising industry when the county coroner, James Kenroy gives his unwavering verdict.

"It transpires," states Kenroy, "that this apparently normal and successful family man had his own Achilles' heel." Kenroy goes on to explain that Mr Martin's "vulnerability" was clearly his lust for high-risk erotic adventure. Being a sailor, Mr Martin had expert knowledge of tying knots and all the evidence pointed to the fact that his predicament had been entirely self generated. Tragedy had struck when a wooden stake that had been employed to ensure that the heavy roller to which the rigging was secured, did not move, had been dislodged, causing the roller to be dragged closer to the manhole and lowering Mr Martin in the process until his face sank into the water. From the pathology reports it seemed that Mr Martin had tried in vain for 16 and a half hours to keep his head out of the water, but eventually succumbed to exhaustion  and drowned. Recording a verdict of death by misadventure, ruling out suicide, Mr Kenroy said: "It is a tragedy that the deceased got himself into."

The inquest also heard that this had not been the first time Mr Martin had tried bondage. Frank Harris, a previous neighbour had, several years prior to this, heard him crying for help one night. Breaking into his cottage, he had found Mr Martin dangling from the beams of his attic with his wrists and ankles tied.

Had Christopher Martin died in normal circumstances, it is more than likely that we would have seen obituaries in the press and tributes in industry publications like Campaign. But this was not to be. Instead, there were a few pieces in the dailies and that was it. No more talk of the man. The whole episode was far too embarrassing for the industry, not to mention those close to him.

Even to this day, one cannot find much, if any, evidence of his work online, which is a great shame because he was an outstanding writer. Indeed, one of my favourite English press advertisements was penned by him. It was written for Volvo, ran across three consecutive full pages in The Times and didn't so much as show an image of a car. Instead the reader was treated to a fairy story in the style of the Brothers Grimm and an illustration of a castle by David Hockney. The discreet headline wasn't even a headline in the conventional sense of the word. It merely read: 'The Castle Race by Christopher Martin. Illustrated by David Hockney.'

In this regard, Christopher Martin is one of only two English copywriters to have successfully placed himself (a la Alfred Hitchcock who loved to place himself in his own movies) into one of his own press advertisements; the other copywriter being the late David Abbott. Strangely, Abbott's advertisement was also for Volvo. (In his ad, the car was shown suspended above him and the headline ran: 'If the welding isn't strong enough the car will fall on the writer.')

Martin's ad was, however, totally unconventional. It broke every conceivable unwritten rule. Besides not showing the car, it didn't even mention a single car in the text. The only mention of Volvo came at the end of the copy in he form of a very discreet logo. Yet despite these apparent shortcomings, this was a brilliantly effective and creative piece of branding that left the reader in no doubt whatsoever that Volvo was an ethical and thoroughly decent company that built exceptional cars. So I thought it time to redress the balance and give the text of Christopher Martin's ad a bit of an airing. Whatever people may have thought of him during his lifetime and after his tragic, if bizarre, demise, this piece of work demonstrates his gift as a writer and the fact that it can certainly pay, in terms of advertising, to be completely and utterly unconventional.

The Castle Race
By Christopher Martin
Illustrated by David Hockney 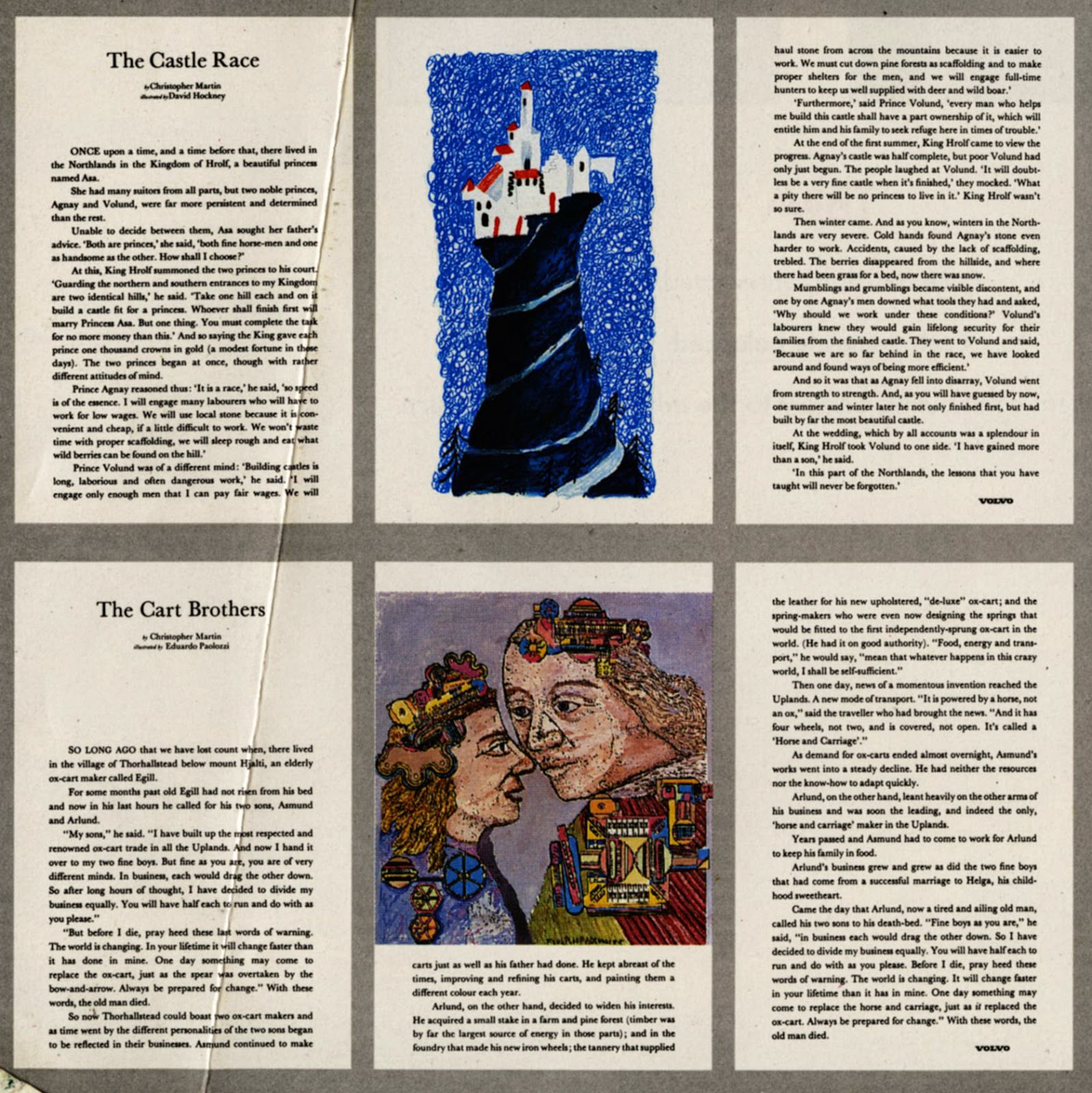 Once upon a time, and a time before that, there lived in the Northlands in the Kingdom of Hrolf, a beautiful princess named Asa.
She had many suitors from all parts, but two noble princes, Agnay and Volund were far more persistent and determined than the rest.
Unable to decide between them, Asa sought her father's advice. "Both are princes," she said, "both fine horse-men and one as handsome as the other. How shall I choose?"
At this, King Hrolf summoned the two princes to his court. "Guarding the northern and southern entrances to my Kingdom are two identical hills," he said. "Take one hill each and on it build a castle fit for a princess. Whoever shall finish first will marry Princess Asa. But one thing. You must complete the task for no more money than this." And so saying the king gave each prince one thousand crowns in gold (a modest fortune in those days). The two princes began at once, though with rather different attitudes of mind.
Prince Agnay reasoned thus: "It is a race," he said, "so speed is of the essence. I will engage many labourers who will have to work for low wages. We will use local stone because it is convenient and cheap, if a little difficult to work. We won't waste time with proper scaffolding, we will sleep rough and eat what wild berries can be found on the hill."
Prince Volund was of a different mind: "Building castles is long, laborious and often dangerous work," he said. "I will engage only enough men that I can pay fair wages. We will haul stone from across the mountains because it is easier to work. We must cut down pine forests as scaffolding and to make proper shelters for the men, and we will engage full-time hunters to keep us well supplied with deer and wild boar."
"Furthermore," said prince Volund, "every man who helps me build this castle shall have a part ownership of it, which will entitle him and his family to seek refuge here in times of trouble."
At the end of the first summer, King Hrolf came to view the progress. Prince Agnay's castle was half complete, but poor Volund had only just begun. The people laughed at Volund. "It will doubtless be a very fine castle when it's finished," they mocked. "What a pity there will be no princess to live in it." King Hrolf wasn't so sure.
Then winter came. And as you know, winters in the North-lands are very severe. Cold hands found Agnay's stone even harder to work. Accidents caused by the lack of scaffolding, trebled. The berries disappeared from the hillside, and where there had been grass for a bed, now there was snow.
Mumblings and grumblings became visible discontent, and one by one Agnay's men downed what tools they had and asked, "Why should we work under these conditions?"  Volund's labourers knew they would gain lifelong security for their families from the finished castle. They went to Volund and said, "Because we are so far behind in the race, we have looked around and found ways of being more efficient."
And so it was that as Agnay fell into disarray, Volund went from strength to strength. And as you will have guessed by now, one summer and winter later he not only finished first, but had built by far the most beautiful castle.
At the wedding, which by all accounts was a splendour in itself, King Hrolf took Volund to one side. "I have gained more than a son," he said.
"In this part of the Northlands, the lessons that you have taught will never be forgotten."
VOLVO

Alex Pearl is author of Sleeping with the Blackbirds
Posted by Alex Pearl at 17:43