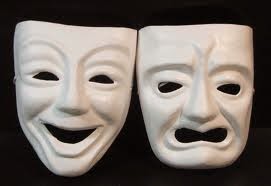 The recent and untimely death of Rick Mayall brought to mind the considerable talents of one of my brother's colleagues who back in the 70s was doing the comedy circuit along with other young hopefuls including a very young and inexperienced Rick Mayall.

Robert Conway, a barrister by trade was a member of my brother's chambers in Lincoln's Inn. But by night he would exchange his barrister's wig for stage make-up and acquire the stage name, Walter Zerlin Jr. (A name taken from his late father who had sung in opera under the name Walter Zerlin.) Besides trying out his comedy material in pubs and advising the young Rick Mayall, he was an astonishingly prolific writer of comedy, and together with writer and producer David McGillivray, wrote ten farces in a riotous series under the deliberately convoluted title: The Farndale Avenue Housing Estate Townswomen's Guild Productions. These were staged versions of classic plays by the likes of Shakespeare and Dickens butchered in the most amusing and inventive ways by a group of amateur thesps, of whom the young Julian Clary was a member.

I had the pleasure of meeting Robert on only a handful of occasions. The first time was at a lawyer's party in Sloane Square hosted by one of the members of the Poet's and Peasants' Cricket Club, a club for whom I was the resident number 10 batsman. I remember little of the party other than being entertained for the entire duration by one of the funniest and instantly likeable characters I have ever encountered. Robert may have been a barrister, but he clearly had little time for legal talk and couldn't bear pomposity. Indeed, he spent much of the time at this party gently poking fun at his learned friends.

Following this encounter, I was fortunate enough to see two of his hilarious Farndale Productions: A Christmas Carol at the Edinburgh Fringe and a Murder Mystery at the Donmar Warehouse. The production in Edinburgh played to a packed house and Robert and his family occupied the front row. (I can still hear him guffawing at his own lines.) The farces have since become a huge hit with amateur groups around the world and have been performed no fewer than 2,500 times.

In 1980 he wrote Running Around The Stage Like A Lunatic in which he played all 17 parts including a one-legged nun - the largest cast ever played in a theatre by one actor. And for this he won an Edinburgh Festival Fringe award and got himself onto the Russell Harty Show.

As a barrister, he was later to defend John Cleese on some minor driving offence, and Cleese was so taken with him that he asked Robert to be the legal adviser on A Fish Called Wanda. Cleese was to later recommend his services to Marlon Brando who needed advice on court room scenes in A Dry White Season.

There is little doubt in my mind that Walter Zerlin Jr would have eventually hung up his barrister's wig and made his name in comedy, in much the same way as Clive Anderson has. But tragically, this was not to be. In early 2001 he suddenly became ill with cancer and passed away in November, leaving a wife and two young daughters.