'Why I hope Hitler was right' 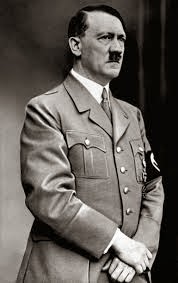 The internet is an amazing thing. It allows you to track down pretty much anyone who writes, entertains or blogs, and peruse their latest offerings, innermost thoughts and real life observations to the world at large. This was the case when I recently trawled the net in search of my old English teacher.

Clive Lawton was (and is) no ordinary teacher. For me, he came to represent the John Keating character played by Robin Williams in 'Dead Poets Society' long before the film hit the big screen. To say he was inspirational is something of an understatement. He had this wonderful gift to get his pupils to challenge and question everything, including our fairly dreary GCSE curriculum, and would turn everything on its head in order to make his point. As a result, we would be asked to mark his essays and take part in impromptu class theatre. The point of all this was to instil into his pupils a love of words and an understanding of the power of language.

Since teaching at my old school, he has unsurprisingly achieved much in his professional life. He was headmaster at King David's School, Liverpool, and then went on to jointly found Limmud, the British charity that promotes Jewish learning to anyone in the world who's interested. He is also Governor of the Metropolitan Police Authority and finds time to write and talk all over the world. The other day I inadvertently heard his dulcet tones on the BBC's World Service while in the car.

So it was with some relish that I discovered some of his talks on youtube. One such talk given to a Limmud gathering in Montreal was provocatively titled: 'Why I hope Hitler was right.' And I suspect that only someone of the Jewish faith would be able to get away with such bare-faced audacity, such chutzpah.

Though he now sports white hair, the strident voice, wit and delivery haven't changed one bit. The talk is riveting and in a relatively short space manages to convey the beliefs of the Nazis and the real feelings of Adolf Hitler as expressed in 'Mein Kampf'.

"Many people," says Lawton, "believe that Nazism and Hitler thought the Jews to be the worst kind of people, but they didn't. The Nazi world view was that the world was stratified into top and bottom human beings. This mock science based on something vaguely Darwinian revolved around the survival of the fittest and the natural order of things."

He goes on to describe the concept of the Master Race and how other lower creeds within the system had their uses. Black people who sat at the bottom of the pile, for instance, were very useful. But Jews were different. They didn't fit into the system, because according to Hitler, they weren't even human. They were some kind of virus or cancer that works on the system in order to stop it working. And by disrupting the system and destabilising it, they would ultimately take it over.

At this point Lawton makes the point that ironically, anyone who's close to the Jewish community anywhere in the world will know that Jews are incapable of organising a piss-up in a brewery. He also tells a rather good Jewish Joke along the following lines: Two Jews in Nazi Germany are sitting next to each other reading. One is engrossed in the Yiddish local paper and the other is reading a Nazi propoganda magazine. "Why are you reading that rubbish?" asks the Yiddish newspaper reader. In response his neighbour shrugs: "I'm fed up reading about how miserable, pathetic and hopeless we have all become. I read this and I hear how we're running the factories, the theatres and the newspapers, and I feel a lot better."

"In the Third Reich," continues Lawton, "might is right. The top dogs can do what they like. There is no morality or ethic other than power." Then he says something I hadn't heard before, probably because I haven't read 'Mein Kampf'. He makes the interesting point that Hitler believed conscience to be a Jewish invention. And of course, there could be no room in the Third Reich for such dangerous sentimentality. Jews, gays, gypsies and those of unsound mind or mental capacity had to be disposed of as a matter of course because they didn't fit into the system. But only the Jews were deemed a threat so huge to deserve a 'final solution' of their own. So although others were killed or allowed to die in concentration camps, by and large it was only the Jews who were sent to the death camps and herded into the gas chambers.

As for conscience being a Jewish invention, Lawton looks incredulous. "Wouldn't that be something to be really proud of if that were true? Just imagine a Jewish lad in his bedroom with a poster carrying the headline: 'Conscience is a Jewish invention - Adolf Hitler'".

The silence in the room is almost palpable.

"The only reason I can only say that I hope Hitler was right, is that I'm not convinced that he was. I've seen far too many Jews say racist things about non-Jews; I've heard too much crap said about muslims; experienced too much misogyny; and too much exclusion of the gay community. So it might not be true that Hitler was right. It may be that Hitler believed in the Jews more than the Jews believe in themselves. And that would be a massive tragedy. One only we Jews can resolve ourselves."