Bit of a ladies' man

There's something captivating about digging up the past, and I suppose it explains why the TV series 'Who Do You Think You Are?' has proved to be such a hit. It's human nature, after all, to be curious about our forebears; to know who they were, how they made their way through life, and perhaps most importantly, if they shared some of our own human traits and foibles.

In my own case, digging very deep is particularly difficult, since both my paternal and maternal lineages stretch back to Russia at the turn of the century, and most records were destroyed in the upheaval of the Bolshevik revolution and the overthrow of czarist rule.

It's a shame, because there are fragments of a shattered past that are intriguing to say the least.

My father's grandparents owned orchards and were inn keepers in or near Vilna, and by all accounts had a relatively comfortable life, until, that is, the Pogroms swept the country. As Jews, their lives would have been thrown into turmoil and in a desperate attempt to escape the violence they, like so many others in the same predicament, fled, leaving everything behind. In doing so they boarded a ship which they mistakenly believed to be bound for New York, but was actually destined for Liverpool.

Today one of my cousins has a handful of sepia prints of our forebears in Russia. Draped in sartorial, silk robes and sporting long, distinguished beards, they peer out of their brown tinged world; a world that was not to last.

I remember my late father talking about his own father recounting his childhood: "Father had a happy childhood," he used to say, "and would often fondly reminisce in old age how much he had enjoyed playing in his parents' orchards as a boy."

Of my mother's Russian lineage, I know next to nothing, other than the fact that one of her grandparents was both deaf and dumb and had settled in Whitechapel. The mind boggles.

Some months ago the subject of genealogy surfaced while sitting in a Turkish bistro in Soho with my old mate John Mac. John, a photographer by trade, began to tell me about his own grandfather who died before he was born, but whose wife he knew well and remembers fondly as 'nan.'

"He was a hugely successful artist, and a bit of a character," confides John while tucking into his shish kebab. This was the first time John had ever mentioned his grandfather, and I was all-ears. 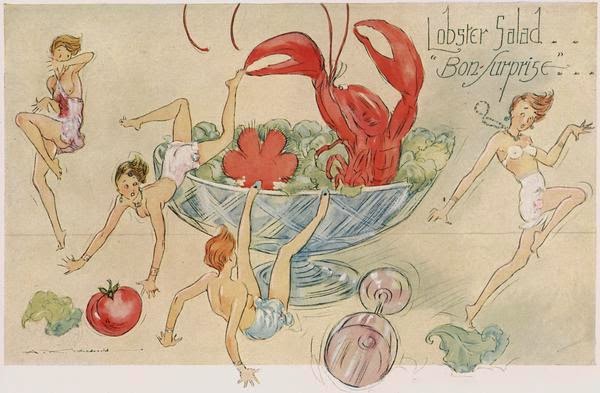 Alastair Kenneth Macdonald, better known in his day as the artist and illustrator, A K Macdonald,
was the son of an eminent  doctor who had worked with Lord Lister - the man who brought us antiseptic surgery. Macdonald's Spanish mother tragically died shortly after giving birth to him, and the family moved to the ancestral home on the Isle of Skye. Here the young Macdonald and his brother explored the wild landscapes of Skye and would eventually be packed off to school in Edinburgh. The boys' grandfather was a man of considerable means having established his own civil engineering firm during the height of the Industrial Revolution. But after his schooling, the family's fortunes collapsed and the young Macdonald took up an apprenticeship with an architect in Glasgow on account of his keen interest in sketching. The appointment wasn't to last as the boy preferred drawing from life, and felt stifled by drawing buildings. So he sought training at the Glasgow School of Art, but in fact left after just six weeks. He subsequently showed some of his sketches to the Editor of the Glasgow Evening News, Neil Munro who immediately saw the lad's talent and gave him his first commissions there and then. From then on, there was no looking back. The commissions began to roll in. During this period, Macdonald was to meet the actor George Hawtree who was appearing in a Midsummer Night's Dream in Glasgow. The actor was so taken with a piece Macdonald had produced for the production that he promised to introduce him to a London editor. He was as good as his word, and weeks later, the young lad found himself on the staff of The Longbow, a noted London periodical. His work got noticed immediately and it wasn't long before he'd be producing work for some of London's most prestigious publications including The Tatler, The Bystander and The Sketch. 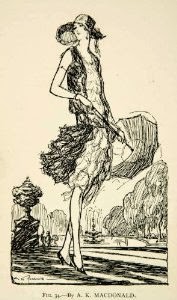 "So when you say your grandfather was a bit of a character, do you want to elaborate?" I ask John quizzically. "Well, he was obviously a man of great charm as well as talent. And he was clearly attracted by the opposite sex," John manages between mouthfuls of chicken. "He was surrounded by all these lovely young things. That's all he ever seemed to draw. He drew them beautifully, of course."

Indeed, it does seem to be the case that a great deal of his illustrations are of diaphanous young ladies in various states of undress, though these are always charmingly rendered, and never suggestive or vulgar. And his line work is extraordinarily fluid and precise. You can see from his work why he was in such demand, and it's remarkable that he was able to produce these drawings with no formal art training to speak of.

With the outbreak of the First World War, Macdonald enlisted in the London Scottish and found himself in the trenches in France, and within three months was invalided out, returning later as an officer with the Gordon Highlanders. He didn't stop sketching, however, and his frivolous young ladies would adorn the walls of his mess and draw the admiration of one particular Colonel.

Following the war, his work continued apace. And by 1924, Alastair Macdonald, now a married man with a daughter of his own, was to meet a distant relative, the illustrator Alice Helena Watson who shared the same agent, Francis & Mills. He offered her the opportunity to come and work with him in his studio. In normal circumstances it would not have been deemed proper for a married man to make such a proposition, but Macdonald was family, after all and Alice's mother could see no harm in it. Inevitably, a relationship developed, Macdonald's marriage fell apart and the two eventually married in 1926. She was 20 and he was 45.

The alimony of £8.00 a week was initially something of a financial burden, but as the two took on work together and finished each others drawings, their finances improved steadily, and by the time they were parenting two sons in 1928, things were certainly looking up. In 1931 they moved to the affluent and leafy neighbourhood of St John's Wood, occupying number 16 St John's Wood Park, a large imposing property that had previously been the magnificent home of the best-selling author, Ellen Wood - better known as 'Mrs Henry Wood.' While Alice took on numerous commissions to illustrate children's books by such authors as Compton McKenzie, Margaret Lodge, A. S. M Hutchinson and her own sister, the author, Effie Watson who wrote under the pseudonym Dale Maniford, her husband's work continued to grace the pages of high society journals. 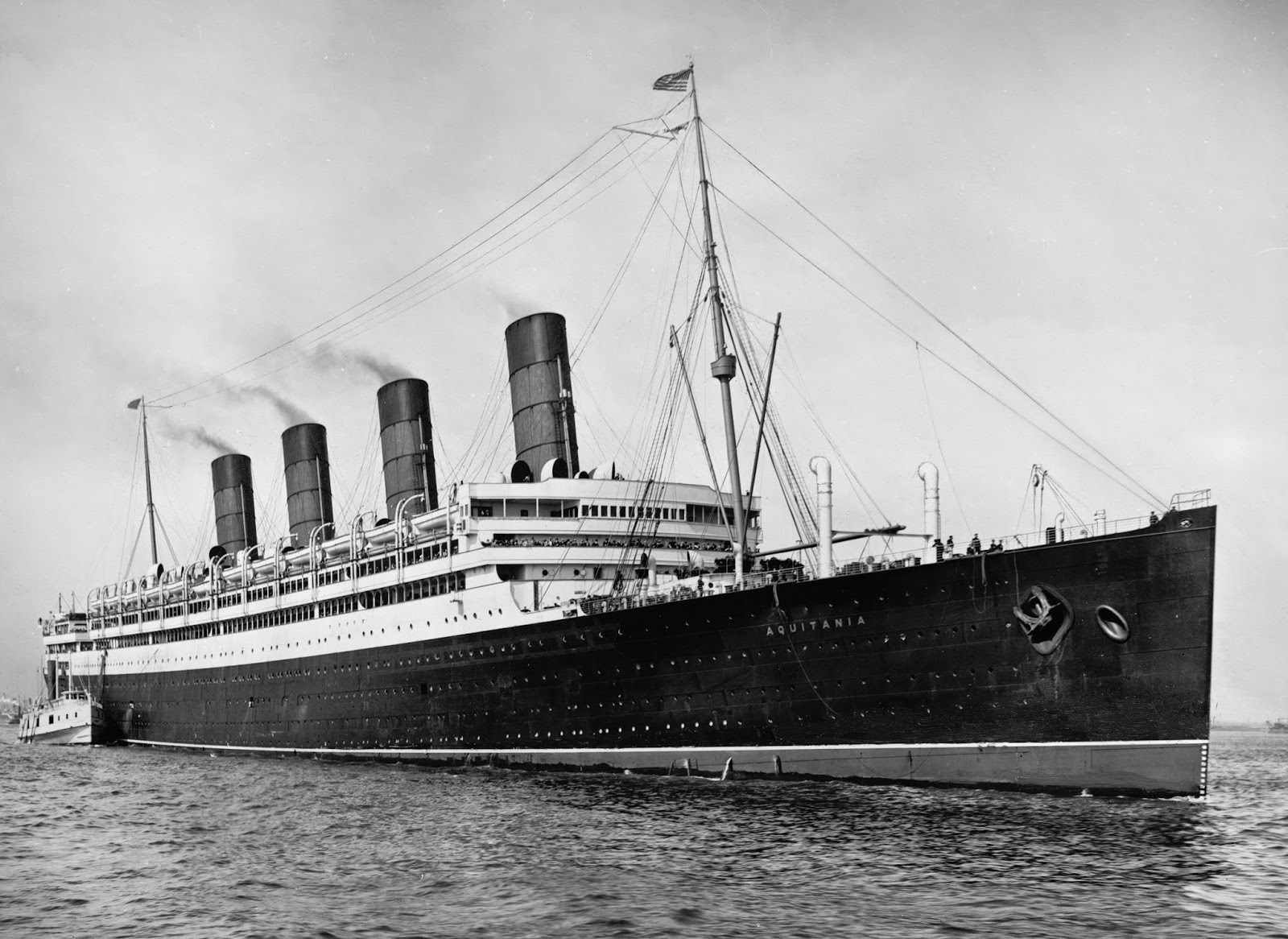 At around this time Alastair received a commission to design a sumptuous promotional booklet for one of Cunard's luxury liners: The Acquitania for which he would receive the astonishing sum of £1,000. In addition, he and his wife would enjoy free board upon the liner to the USA. They were in fact offered the Royal Suite and dined at the Captain's table. The trip, which must have been quite something was ultimately marred when Macdonald's agent absconded with all the money. To give you some idea, £1000 back then would be worth around £57,000 in today's money. A huge sum to have had stolen.

That misfortune marked a turning point in Macdonald's career. Magazines increasingly turned to photography and many that had employed his talents either changed in character or disappeared altogether. "There are," says John, "many parallels between his industry and mine. Look at the way digital technology has affected the world of photography, film making and retouching. If you can't embrace the changes, you tend to get left behind." 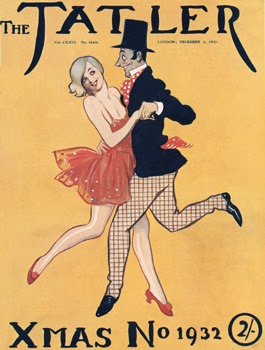 Alice, by contrast, found that more and more children's books wanted her work, so she had to work twice as hard to compensate for her husband's lack of work.

By the time the Second World War had broken out, the shortage of paper had dealt Macdonald's business a fatal blow, and his work dried up. To add insult to injury, their home was bombed in 1940, and the couple moved to number 24 Church Row, Hampstead. It was hardly downsizing. Church Row is one of Hampstead's finest roads, and its Grade II listed Georgian properties are today among the capital's most desirable. (Some years later, the famous comic genius, Peter Cook chose to live on this very same road at the very height of his professional career.)

To make ends meet, Alice had to go into overdrive on the work front as well as letting every spare room to students while cooking ten meals every night. Naturally, Alastair would help by taking on some of his wife's work, but there can be little doubt that it must have been difficult for them to sustain the lifestyle that they had become accustomed to.

John remembers seeing a letter addressed to his grandfather from the Savage Club which he had been a member of. His account stood in arrears to the tune of £1,000 and the club had regrettably taken the decision to reject his membership.

During this period, the two boys James and David lived with Alice's sister Effie in the Chilterns. They stayed there for three years, received no schooling and were looked after by a housekeeper.

Alistair only received one commission following the war, and this was to illustrate Anthony Armstrong's fairy tale The Naughty Princess, which had first appeared in 1935 alongside Macdonald's drawings in The Strand magazine. In the late 1940s, Alistair became ill, but continued painting until he died in June 1948 at the age of just 67.

It was a sad demise, and the family had no choice but to leave Church Row.

Alice continued illustrating books into her old age and lived with her sister who became ill with cancer and died in 1960. Following Effie's death, Alice lived in various different properties in London and took on occasional illustration jobs. In her 70s, she sadly began to lose her eyesight, and her remaining years were spent in Lewisham where her son David had bought a flat for her. She died in 1984 aged 88.

In writing this piece I was struck by a couple of uncanny coincidences that span the generations. Like his grandfather, John has also spent much of his professional working life capturing images of young female fashion models albeit with a camera rather than a pen or paintbrush; images that have appeared in the equivalent up-market publications that his grandfather's work would have appeared in all those years ago. And like his grandfather's father, John's own father married a woman of Spanish origin.